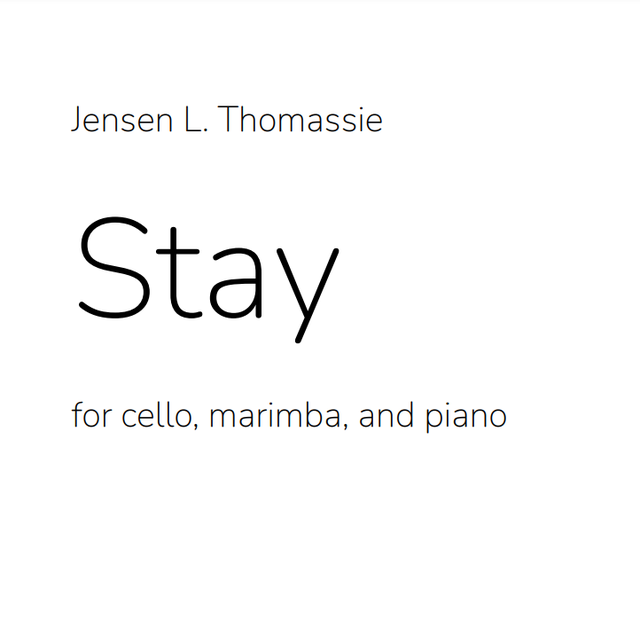 Stay for cello, marimba, and piano

This first movement delves into the many layers of two characters, represented by cello and marimba, and reveals more and more throughout the texture as the movement unwinds.  The fast paced beginning eventually slows to a grand chromatic fall where the two characters reach a breaking point, followed by a piano interlude, ending the movement without resolution.

The second movement is the most programatic of the three, beginning with a solo statement from the marimba, and gradually introducing conversation between the cello and marimba, leading up to their first unison melody at measure 47.  More conversation and more conflict ensue, but ultimately resolve at the recapitulation of the original unison melody.  The final conversation occurs at the most waltz-like part of the whole movement and ends on a question mark after all that has been discussed.  The dance is ultimately one of joy and unity, but there are connotations throughout that not everything is well between the two characters.

Movement three begins with conflict and constantly builds that tense feeling throughout.  The cello finally has its time to speak in this movement in a cry out, resulting in more conflict.  Though the two characters often find themselves in unison, the dissonance throughout the texture conveys the disagreement between two, ultimately ending with a cry out from the marimba and a strong resolution ending the conflict, but in no way in a positive light.

You will have a access to the download link for 24 hours after purchase. Within that time you may download the product as many times as you need, but after those 24 hours, no more downloads will be allowed. As is the case with digital downloads, no refunds are allowed because the download has already happened and there is no returning the product(s).