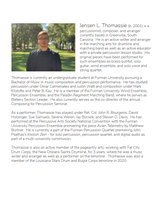 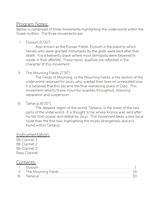 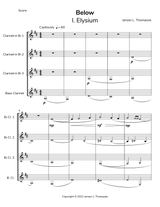 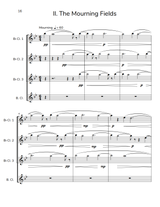 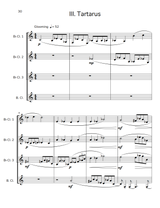 Below for clarinet quartet

Also known as the Elysian Fields, Elysium is the place to which heroes who were granted immortality by the gods were sent after their death. It is a heavenly place where most demigods were believed to reside in their afterlife. These heroic qualities are reflected in the character of this movement.

The Fields of Mourning, or the Mourning Fields, is the section of the underworld reserved for souls who wasted their lives on unrequited love. It is believed that this became the final wandering place of Dido. This movement reflects these mournful qualities throughout, stressing separation and suspension.

The deepest region of the world, Tartarus, is the lower of the two parts of the underworld. It is thought to be where Kronos was sent after his fall from power and defeat by Zeus. This movement takes a less tonal route than the first two, highlighting the murky strangeness and evil found within Tartarus.

-pdf of the score and parts

You will have a access to the download link for 24 hours after purchase. Within that time you may download the product as many times as you need, but after those 24 hours, no more downloads will be allowed As is the case with digital downloads, no refunds are allowed because the download has already happened and there is no returning the product(s).